How we weigh ourselves

Damian Kerlin discusses the extreme lengths gay/queer men will go to change their bodies - including using steroids and having plastic surgery - just to become "accepted" by others in the LGBTQ+ community.

This summer should have been a celebration. Boris Johnson eased restrictions and bars opened, Pride festivals took place and flights abroad were granted. What should have been a joyous time, became a ticking time bomb as a spotlight shone on insecurities plagued by the LGBTQ+ community over body image and how much we strive to and then undervalue ourselves when we don’t fit societal aesthetics.

A report from the BBC identifies the extreme lengths gay men will go to change their bodies - including using steroids and having plastic surgery - just to become "accepted" by others in the LGBTQ+ community. Many said pressure from social media platforms and dating apps was exacerbating their body issues. 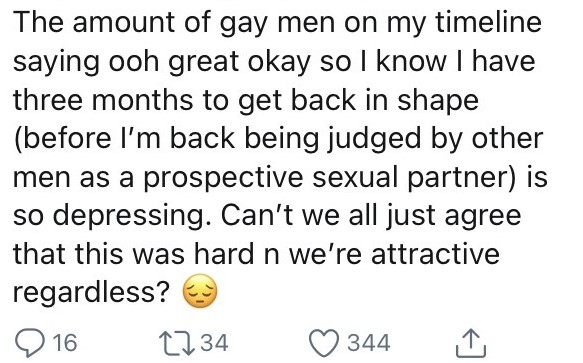 I’ve been on a diet since I was seven. I grew up during the paparazzi era and it was brutal. As a child obsessed with celebrity and pop culture, I was aware of what body size and shape was deemed socially acceptable and more destructively what was not. I was never big, but I was round, much rounder than the boys in my class.

At fourteen years old I took it upon myself to lose weight. I had no idea of how much weight I wanted to lose, I just knew I wanted to lose it. As I stood at the bottom of the field behind my house, I blared Girls Aloud ‘The Show’ from my headphones and I ran. Up and down, up, and down. Eight times. I strived for ten, but for someone who had never ran before, I took this an accomplishment. I showered, delighted (delusional) my skin had that after work out glow, and not a single carb passed my lips that day.

It was all fun and games until I woke up the next day. My chest heavy, my legs numb. I couldn’t move. The day before I was giving Nadine Coyle a run for her money with my gazelle like stride, but how the mighty had fallen. I slid out of my bed onto the floor, my body wrapped in a cast, pulling myself up from the chair across the room. Five days I felt like that. Five whole days. I could barely get myself dressed and I avoided stairs as the gravitational pull made my legs buckle.

As someone who had never played sport in his life, I choose PE for GCSE under the impression that it would make me thin, like the ‘other boys’ which would make me happy when in reality it made me fucking miserable.

Encasing each other in these boxes or “tribes” hinders us from using our emotions and treating one another with humanity. The fact that the world’s most popular gay dating app, Grindr, which is the first experience of the wider community for so many gay men, asks us to categorise ourselves this way is concerning. 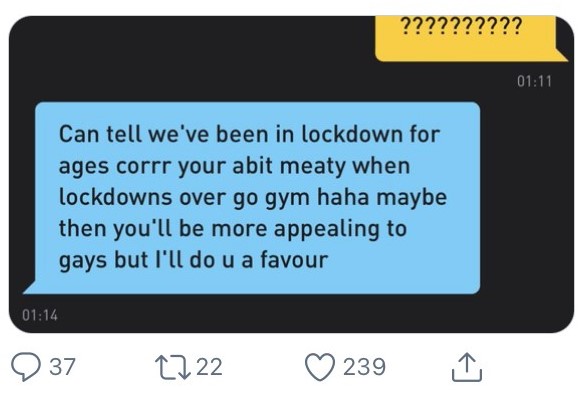 The concept of placing young skinny, hairless and mostly white men as the ideal is not only tone deaf, but hugely irresponsible when considering how prone gay men are to body confidence issues and eating disorders, but is a stark reminder of the unattainable expectations that gay men place on ourselves.

A third of LGBTQ people say they’ve experienced suicidal thoughts over their body image. The worrying statistics come as part of a new survey commissioned by the Mental Health Foundation and conducted by YouGov, which examines the way people think and feel about their bodies. 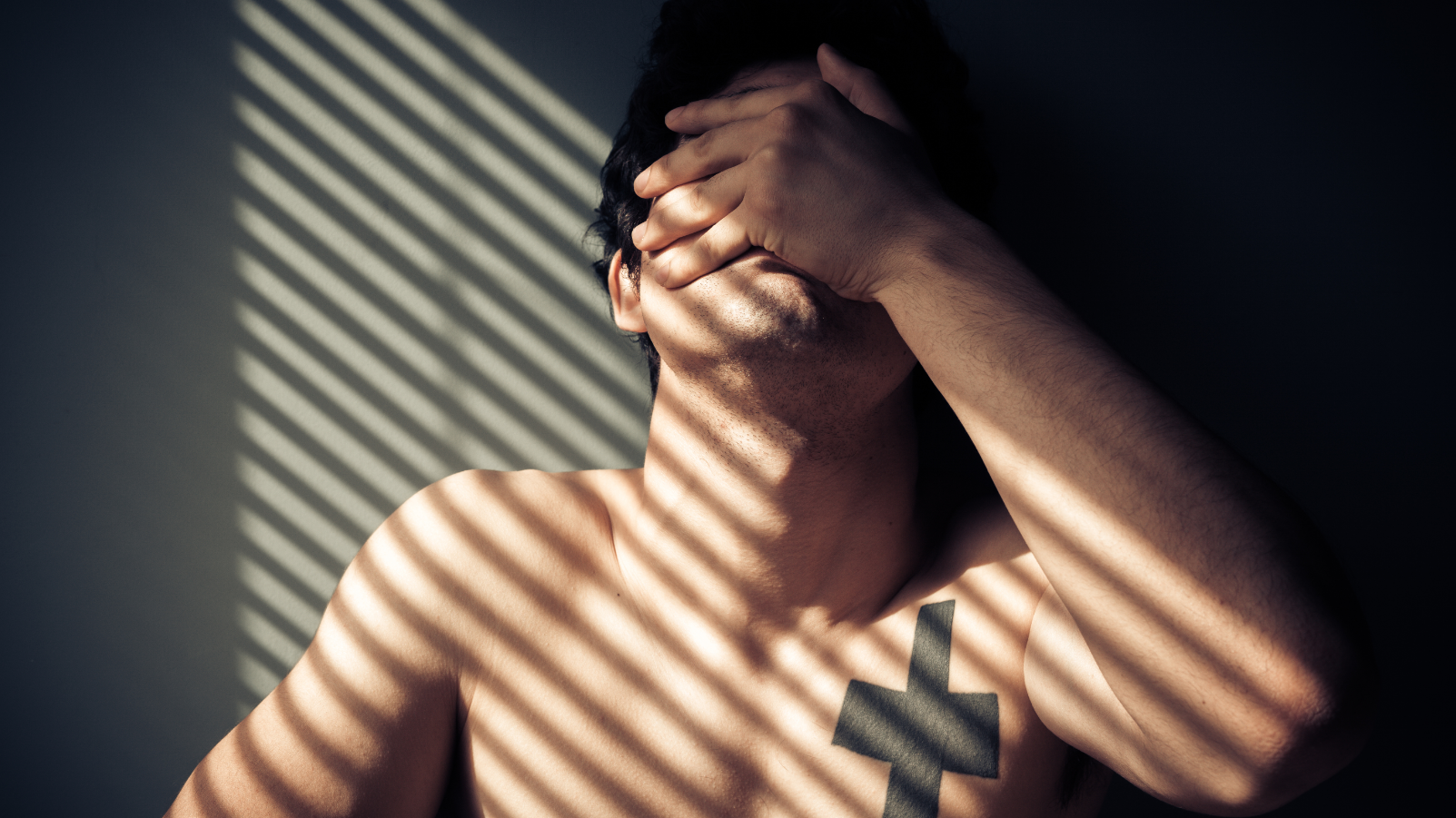 Similarly, one third (33%) of adults who identify as gay, lesbian, bisexual or other said they’ve experienced suicidal thoughts or feelings because of their body image, compared to 11% of the adults who identified as heterosexual. You can read the full report here. 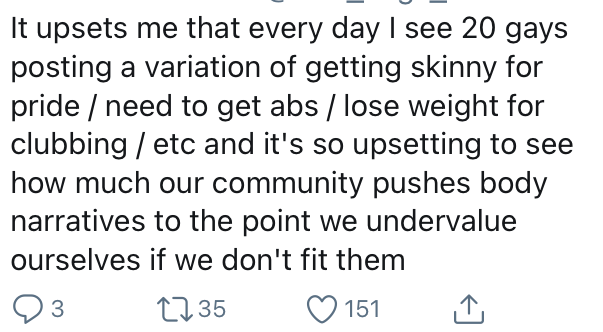 The pressure to conform to a certain body type is even harder to get a grip on when the finish line keeps getting pushed back over time. As a young gay man, skinny is the way forward, but as you age out of that 'twink' bracket in which smooth, lithe bodies are prized the goal posts shift. Skinny is no longer enough anymore and you need to be bigger, lift weights and have abs, which is hard to achieve.

Slowly, I have come to learn that my happiness is not intrinsically linked to how thin I am. One can exist without the other. Our bodies are so much more than empty aesthetics. Size does not determine happiness. I would be lying if I said I don’t think it about it but the reason for doing so has changed. I now exercise because it makes me feel good.

Your value is not measured by a number on the scales but unfortunately nobody is free from the prison of other people's opinions. Collectively, we all need to accept that tackling these body image issues is our joint responsibility. Think twice before you arbitrarily post your next shirtless selfie—is the immediate boost to your own self-esteem worth the triggering effect it could have on followers?

Report the guy on Grindr who says he’d be interested “if you’d only lose a few pounds.” And try to remember that none of us is immune to the gnawing suspicion that the way we look just isn’t good enough. Behind every gym pic, even one greeted with a torrent of fire emojis, there’s another person battling their own body image demons.

Damian Kerlin is a Cardiff based writer and journalist. As well as managing his own blog, www.damiankerlin.com, Damian has written for The Belfast Telegraph, Daddi Life, Gay BoyBible, Every Day Magazine, Gay Community News, Left Foot Forward and Adoption UK (to highlight only a few...). This year Damian was listed as a Rising Star as part of Wales Online Pinc List for his journalism and blogging on current affairs and rising issues affecting the LGBTQ+ community.